Particularly beautiful stone mill at Baisogala Manor built in the 19th century. in the middle. Today, he is part of the Comoros Chamber Ensemble. It is a brick-cone-shaped, three-storey, pyramid-shaped, octagonal, with bypass galleries decorated with arches. Each of the three floors has a different style: the first floor is classical, the second one is the Renaissance, the third one is the Gothic.

The mill operated until 1954. In 2008 it was declared a cultural monument. 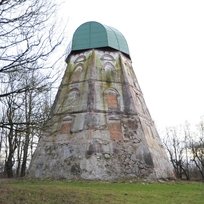