This property used to belong to the Šemetos family for many centuries. In 1863 Juozas Šemeta was exiled to Ulfa  by the Tsarist Government and his Manor was expropriated as a consequence of his  participation in the rebellion.

The Classicist Palace of the Manor built by Tadas Šemeta  in the beginning of the 19th century has remained until the present days. It is a single floor masonry building with a two-floor central part. Its facade is decorated with a 6-column portico, from the yard side the central part is highlighted with 6 pilasters and a triangular pediment. T. Šemeta had turned the Palace into a culture centre. In 1811 here played a Manor orchestra under the direction of Juozas Vaitkevičius, and it is believed that a music school was established here in 1822.

Owners of the Manor had been changing frequently since the 19th century. For this reason the interior of the Palace, which once made a parade of spacious lobby, oak stairs, large and luxurious banqueting hall decorated with two round stoves made of round tiles, was reconstructed more than once. The ceiling of the hall was decorated with plaster elements.

Stone gates of the Manor, spirit distillery, and a barn have remained till the present days.

The park of the Manor stopped sighing a long time ago as it was cut down during the Interwar Period.

Some buildings of the former homestead ensemble have remained until the present days as well: cattle-shed and other buildings are partially set of boulders, not plastered, with semi circular windows. 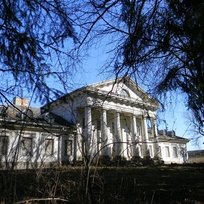 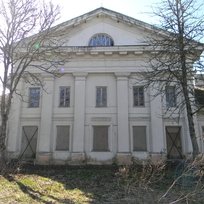