Mound Raginėnai looms in Raginėnai village, which belongs to Pakalniškiai eldership, in the territory of Radviliškis district municipality. The mound is equipped on the upland on the left bank of the Daugyvenė River, and, according to conducted archaeological research, dates back to the II millennium – I millennium Before Common Era.

In 1996, Raginėnai mound was explored by Lithuanian archaeologists’ expedition. On the northern and western foots of the mound, in the area of 3,74 hectares, the settlement of the foot was found. A cultural layer, whose thickness is up to 20 centimetres, with a fireplace, a place for a column, a small clay weight, a rough, smooth and thrown pottery, animal bones was discovered. Two burial mounds dating back to the 2-7th centuries AD were discovered near the mound. They were explored during archaeological expeditions in 1829, 1909 and 1910.

Raginėnai mound can be reached going along Pakalniškiai-Rozalimas road, turning right short of the road to Burbiškis, and after going about 200 meters along the cart-road up to the foot of the mound. 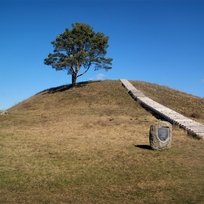 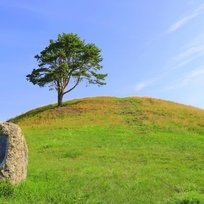