THE OBELISK OF VYTAUTAS THE GREAT

By initiative of the club “Historical memory” in 1989 the monument was found, restored and rebuilt. On 15 July 1989 it was consecrated. This was the day commemorating the 579 anniversaries of the Battle of Grunwald.

2017, celebrating the 450th anniversary of Radviliškis town, the monument was renewed: covered with granite layer, tiles around were changed, panel with Vytautas sign was arranged and the entry "1430-1930". 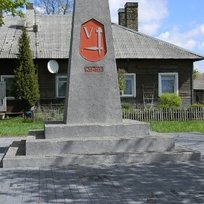