THE SCULPTURE OF THE MOTHER OF GOD - "MARY OF INNOCENT START"

The sculpture is next to the gate of the manor park, it is built on the axis of the alley and seems to bless everyone who comes to Burbiškis manor and leaves it.

The monument to the Mother of God is typical of 19th century sculpture, in line with the style of academic realism. Pedestal in neo-baroque forms. Mary is depicted standing, hands folded on her chest, snake under her feet with an apple in her nostrils.

To this day it has remained indestructible but severely depleted. The pedestal was restored in 1993, the broken details were restored, and it was plastered. In 1996, the sculpture was restored, repainted and tinted.

During the erection of the sculpture, a mythological stone with the "Foot of Mary" was built into the pedestal. It is said that this stone used to be in the wilderness, but at the request of the landowner M. Baženskis it was taken to the park. The stone has been preserved to this day - it is at the bottom of the pedestal. 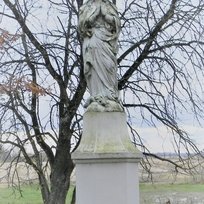